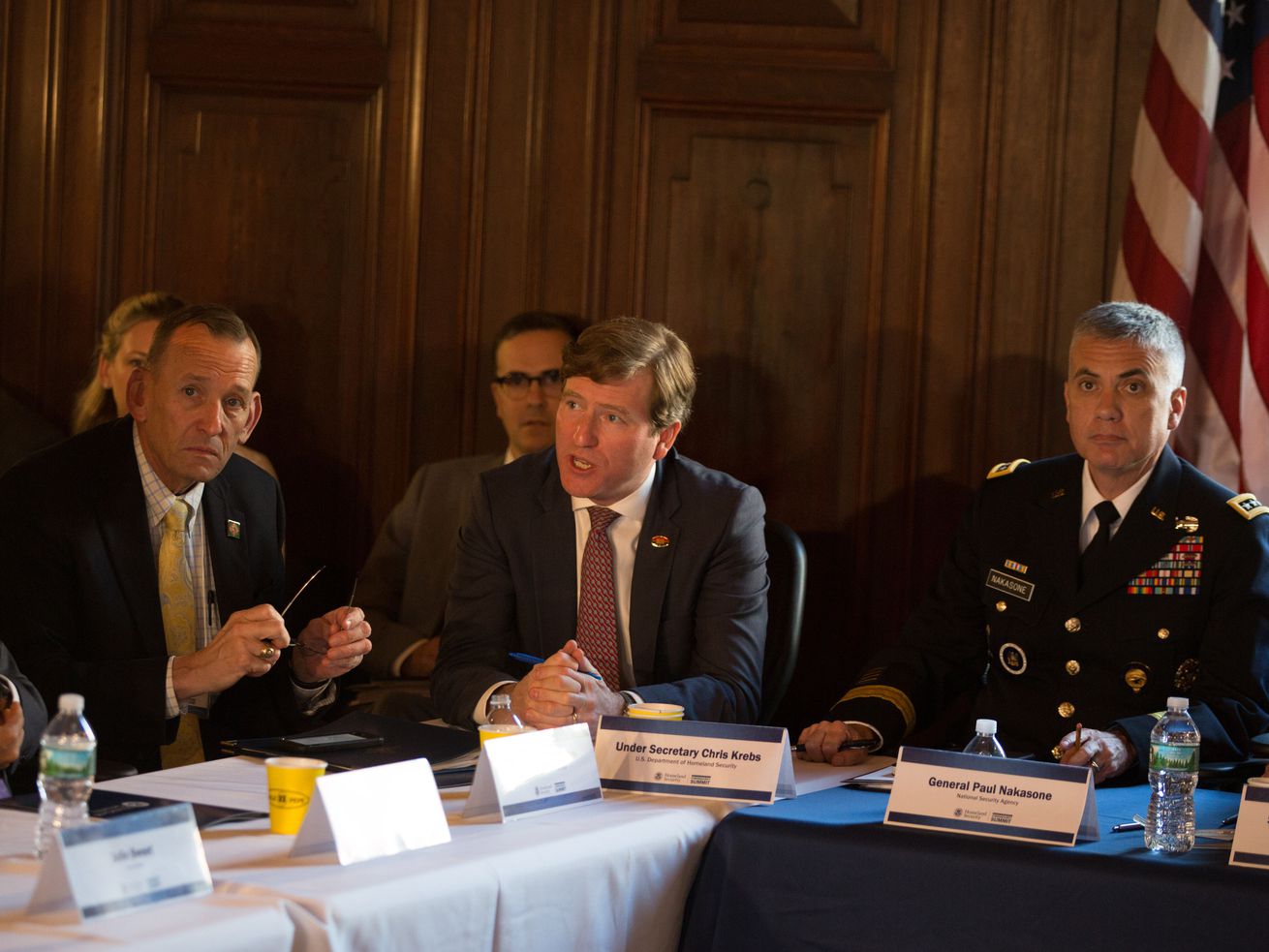 Homeland Security put out a statement with state and local officials that countered the president’s fraud claims.

The 2020 US election was the most secure in American history, according to US elections officials.

“The November 3rd election was the most secure in American history. Right now, across the country, election officials are reviewing and double-checking the entire election process prior to finalizing the result,” the coordinating bodies on election infrastructure and security said in a joint statement issued by the Department of Homeland Security’s Cybersecurity & Infrastructure Security Agency (CISA).

The statement directly contradicts President Donald Trump, who has made unfounded allegations of widespread voting irregularities and fraud. The president is using these claims to challenge the vote counts in several key states that delivered President-elect Joe Biden his apparent Electoral College victory.

The Trump campaign has filed dozens of lawsuits, some of which have already been dismissed. But the barrage of legal action and Trump’s false claims — often bolstered by right-wing media and some of the president’s allies in the Republican Party — have undermined overall faith in the electoral process and in the safety and security of US elections.

In the statement, election officials noted that though some states may do recounts, “All of the states with close results in the 2020 presidential race have paper records of each vote, allowing the ability to go back and count each ballot if necessary.” This beefs up the security of the vote and allows officials to correct and identify mistakes in the counting process.

But the statement made one thing very clear: “There is no evidence that any voting system deleted or lost votes, changed votes, or was in any way compromised.”

Or as Chris Krebs, the head of CISA, put it: “TLDR: America, we have confidence in the security of your vote, you should, too.”

Election Infrastructure Subsector – SCC/GCC Joint Statement on the 2020 Election. TLDR: America, we have confidence in the security of your vote, you should, too. #Protect2020 https://t.co/nT9ZnHTbSv

Learning the lessons of 2016 and fearing further foreign interference in 2020, CISA undertook massive efforts in both 2018 and 2020 to protect America’s election infrastructure. Krebs made securing elections a priority and received bipartisan backing for his efforts to do so.

In 2020, CISA set up a 24/7 “war room” that election officials could contact to report suspicious activity in real time, and had CISA officials at the ready to deploy to polling places, if necessary, according to the Washington Post. CISA also beefed up its public communication before and after the election on potential threats, including setting up a “rumor control” web page that debunks election disinformation.

Of course, countering election disinformation is infinitely more difficult when the president of the United States is the main purveyor of that disinformation. Krebs has reportedly told people he believes he’ll be fired soon, in large part because his efforts to correct false claims about election vulnerabilities has, not surprisingly, put him on the wrong side of the White House.

The 2020 election faced a lot of challenges. But the system worked.

Krebs and CISA are not the only voices here. America’s election officials agree that this US election was not only secure but incredibly successful given the unprecedented challenges states faced.

The Covid-19 pandemic forced election officials across the country to quickly adapt protocols, often with limited resources. Some states vastly expanded mail-in voting. Election officials had to manage public health concerns at polling places, like social distancing and sanitation, and had to come up with innovative solutions such as deploying curbside voting.

“The 2020 general election was one of the smoothest and most well-run elections that we have ever seen, and that is remarkable considering all the challenges,” Ben Hovland, a commissioner on the Election Assistance Commission, told the Associated Press.

The New York Times spoke to election officials in every state, including plenty of Republican officials, and all stated there was no evidence of widespread fraud or irregularities in this election. “There’s a great human capacity for inventing things that aren’t true about elections,” Frank LaRose, the Republican secretary of state in Ohio told the Times. “The conspiracy theories and rumors and all those things run rampant. For some reason, elections breed that type of mythology.”

Some states have begun running post-election audits; in Arizona, for example, half the counties conducted post-election audits, and none of them found any evidence of systematic voter fraud. That includes Maricopa County, where Phoenix is located; authorities there found no irregularities, according to CNN. Pima County, where Tucson is located, discovered just a two-vote discrepancy. The state, where he leads by more than 11,000 votes, has already been called for Biden.

As more states conduct recounts or post-election audits, discrepancies are going to emerge. But voter fraud is extraordinarily rare in the United States — just a handful of cases out of the tens of millions of ballots cast.

NYU’s Brennan Center for Justice did a study in 2007 that found the incidence of voter fraud to be between 0.0003 percent and 0.0025 percent, which made it more likely that an American would be struck by lighting than “he will impersonate another voter at the polls.” A Washington Post report in December 2016 found just four cases of voter fraud in that year’s election.

Trump’s focus on mail-in voting as somehow full of fraud also doesn’t hold up. In Oregon, which has been voting by mail for about two decades, officials referred 54 cases of possible voter fraud to law enforcement in 2016. Of those, 22 people — representing just 0.0001 percent of all ballots cast that year — were found guilty of having voted in two states.

Another analysis by the Washington Post and the nonprofit Electronic Registration Information Center found officials in Colorado, Washington state, and Oregon referred 372 possible cases to law enforcement of double voting or voting on behalf of a dead person, out of about 14.6 million mail-in votes in the 2016 and 2018 general elections. That comes out to about 0.0025 percent of all ballots.

Trump’s rhetoric undermines faith in the democratic process, but it also obscures the hard work done by election officials, ballot counters, and poll workers across the country in 2020. Beyond the logistical hurdles of Covid-19, the threat of foreign interference loomed over this election. So did fears of potential voter intimidation and violence at the polls. But with the exception of a few isolated incidents, the elections were largely safe and peaceful.

The pandemic also raised concerns about poll worker shortages, and that led to a surge of volunteers in some places, a trend that played out across the country.

Emily Hou, a 27-year-old who volunteered as a poll worker in San Francisco this year, described a long Election Day that began at 6 am and ended long after the polls closed. It took her and her colleagues about three hours after the polls closed to shut down the polling location, as they had to triple-check the number of ballots they’d received against the number of ballots the machine had counted.

Sophia Radis, an 18-year-old college student who signed up to be a poll worker in Madison, Wisconsin, saw firsthand the meticulous process of absentee-ballot counting: teams of two, handling just three to five ballots at a time, with observers present and election officials overseeing their work.

Kristi Critchley, who worked as a poll clerk in Pima County, Arizona, kept a running list of how many people had cast ballots, and then checked that against the number of ballots turned in — not what was written on those ballots, just that the numbers matched up. The numbers are checked, and checked again, and checked again. “I very much got a greater appreciation for how tight the process is, and how hard people are working to try to keep that as accurate and transparent as possible,” Critchley told me.

But maybe the biggest testament to the election’s success was the incredibly high turnout, with a preliminary estimate of 160 million Americans voting. With votes still to be counted, 2020’s turnout is now at more than 64 percent of all eligible voters, the highest percentage since 1900. A huge chunk of those voters did so early, either in person or by mail, another first.

Janet Boyd, who’s worked as an election official for nearly three decades in Arlington County, Virginia, told me that law changes before and after Covid-19 could have created challenges for both election officials and voters. But they were prepared and managed everything well, both during the early voting period and on Election Day.

“There could be some little mistakes here and there,” Boyd said of the election, “but I can’t imagine that any of them are to such a level that would create a change in the election results.”

View: 4Police say the shooting took place outside Woburn Collegiate Institute around 3:20 p.m. on Monday, and left 18-year-old Jefferson Peter Shardeley Guerrier dead. See source
View: A ticket sold in Ontario has won the Lotto Max jackpot for Tuesday’s draw and there were also other big-winners sold in the province.  See source
View: More than 96 per cent of voting members of Halifax Regional Police said they did not have confidence in police chief Dan Kinsella as a leader, according to an…