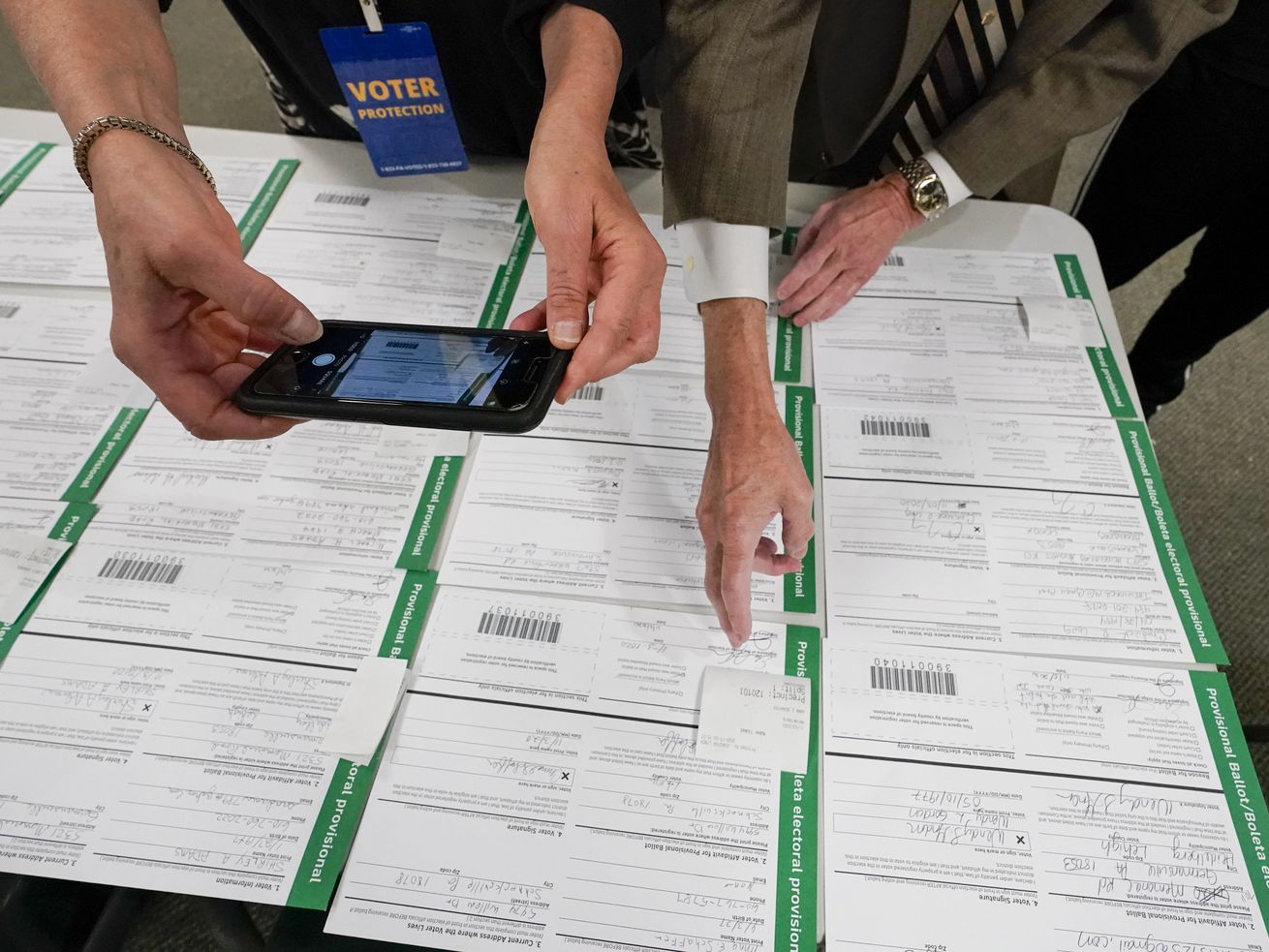 American voters have decided that President Donald Trump will not be reelected, but legal challenges remain in several battleground states.

The president has refused to concede his projected loss, despite congratulations from world leaders coming to Democrat Joe Biden, now addressing the nation “From the Office of the President-Elect” in daily comments.

On Saturday, media outlets projected that President-elect Joe Biden would defeat the incumbent president and vote counts continue to back up that prediction, despite the president’s own declarations that “We will win!”

As foreshadowed by the president before Election Day, Trump’s campaign has pursued election-related legal actions while the president insists that “massive ballot counting abuse” is occurring in the wake of the election — without providing evidence of such abuse.

In a Monday memo, Attorney General William Barr broadened the authority of federal attorneys to open investigations in “voting and vote tabulation irregularities prior to the certification of elections in your jurisdiction,” according to Politico and The Associated Press.

According to The New York Times, “Justice Department policies prohibit federal prosecutors from taking overt steps…to open a criminal investigation into any election-related matter until after voting results have been certified.”

“While serious allegations should be handled with great care, specious, speculative, fanciful or far-fetched claims should not be a bases for initiating federal inquiries,” Barr adds in the memo. “Nothing here should be taken as any indication that the Department (of Justice) has concluded that voting irregularities have impacted the outcome of any elections.”

Hours after the memo was released, Richard Pilger, the director of the Justice Department’s Election Crimes Branch, stepped down from his position — citing Barr’s memo, The New York Times reported.

“Having familiarized myself with the new policy and its ramifications,” Pilger wrote, according to The Times, “I must regretfully resign from my role as director of the Election Crimes Branch.”

Although it’s too early to tell if federal prosecutors have — or will — open any election related investigation, here is where Republicans or the Trump campaign have challenged the election results:

The day after the election, the president alleged that election officials in Pennsylvania “won’t allow legal observers” to watch the ballot counting process and that counting should be stopped. But that has not stopped votes their from being counted and President-elect Biden is projected to win the state.

We have claimed, for Electoral Vote purposes, the Commonwealth of Pennsylvania (which won’t allow legal observers) the State of Georgia, and the State of North Carolina, each one of which has a BIG Trump lead. Additionally, we hereby claim the State of Michigan if, in fact,…..

In U.S. District Court Thursday, a judge pressed GOP attorneys who’d filed suit there on how many of their own observers were allowed to watch the tallying in Pennsylvania, The Washington Post reported.

“A nonzero number of people” had been allowed in the room to observe, the attorney said.

Because of the pandemic, there has been a record number of mail-in ballots that have required new and experienced voters to adapt their voting habits. When there is a mistake in filling out a ballot or the envelope used to mail the ballot, election officials attempt to “cure” the ballot by notifying the voter that a signature doesn’t match that on file or that there has been another issue.

On Monday, the Trump campaign sued Pennsylvania Secretary of State Kathy Boockvar— the state official who oversees elections — and seven “Democrat-heavy” counties for “various practices, including decisions by some counties to notify voters whose mail-in ballots appeared to be packaged incorrectly of that fact so that they could ‘cure’ their ballot or seek to cast a new one,” Politco reported.

“Some of the counties have said that was their longstanding practice and that lists of such ballots were sent to representatives of both political parties,” wrote Politico.

The suit claims that upwards of 680,000 ballots in the Allegheny and Philadelphia counties were processed “without review” and observers were “far away from the action,” while also acknowledging that observers were indeed present for the tallying, Politico reported.

On Monday afternoon, the Republican Attorneys General Association held a press conference to announce that they’d filed an amicus brief with the Supreme Court of the United States in regards to a September Pennsylvania Supreme Court ruling that extended the deadline of mail-in ballots in the state by three days.

Association chairman, Louisiana Attorney General Jeff Landry, compared the state Supreme Court’s ruling to allow the extension as “akin to the referees getting to change the rules of the game midway through the football game.” The association was also considering filing briefs in other states.

The Republican attorneys general cited two reasons for filing an amicus brief; the first reason was a “separation of powers issue” — accusing the Pennsylvania Supreme Court overstepping its own authority — and the second was to ensure “election integrity.”

In October, the U.S. Supreme Court decided not to take up the GOP’s case — saying it was too close to the election — but left themselves an opportunity to take up the case later, The New York Times reported. Supreme Court Justice Samuel A. Alito Jr. did require Pennsylvania election officials to separate ballots that arrived after the election and to not include the votes in “announced vote totals,” according to The Times, even though state election officials were already segregating the ballots.

As of Tuesday morning, President-elect Biden maintained a more than 45,000 vote lead over the president, according to an ABC News tally.

Republicans claimed that “irregularities have plagued the election” in Clark County — the seat of Las Vegas — but, did not provide evidence of of those irregularities, according to NPR.

A lawsuit “wanted U.S. District Judge Andrew Gordon to order a ban on the use of a machine for verifying signatures,” The Washington Post wrote, but the judge “told the plaintiffs to return to court if they found more evidence to back their claims.”

Utah Attorney General Sean Reyes, who was just reelected, alleged in a statement to Deseret News Monday that some voting mistakes in Nevada “may have been made innocently,” while “others appear more intentional.”

Reyes — who spent this weekend volunteering his “personal leave time” in Nevada reviewing election “issues” — did not provide any specifics of these mistakes in his statement.

Biden is projected to win Nevada by more than 35,000 votes, according to ABC News.

An election night viral video from Arizona claimed inaccurately that ballots filled out with a felt-tipped Sharpie were not being counted, which led crowds of protesters to show up to the polling station. The hashtag #Sharpiegate went viral on social media in the wake of the misinformation.

Officials from Maricopa County, Arizona and the U.S. Department of Homeland Security each released messages that the the use of a Sharpie would not invalidate a ballot and that the felt-tip pens were even recommended by the ballot manufacturing because they “provide the fastest-drying ink.”

Still, a Maricopa county voter — aided by a conservative out-of-state legal group — filed a lawsuit alleging her ballot and others had not been counted properly and asked that all voters who used a Sharpie should be able to cure their ballots, according to The Times.

On Saturday, attorneys that filed the “Sharpiegate” case had submitted a dismissal notice to the state’s secretary of state, The Associated Press reported,

The Arizona Republic reported that the controversy had not stopped ballot counting there.

Biden maintains a nearly 15,000 vote lead in Arizona, according to ABC News.

A Chatham County, Georgia judge — the seat of Savannah — threw out a case Thursday where the Trump campaign requested that absentee ballots arriving post poll closure be separated from other ballots, according to The Post. For a mail-in ballot to count in Georgia, it needs to arrive before polls close on election day — with exceptions for ballots from service members and overseas Georgians.

The day prior, the GOP submitted an affidavit by a poll worker alleging ballots that arrived late were added to other timely ballots, while Democrats submitted a pair of statements from poll workers that said it had not observed “intermingling,” wrote The Post.

According to The Times, the allegation involved 53 ballots and that judge said there was no evidence they had been mishandled.

The presidential race in Georgia remains narrow, with Biden in the lead with upwards of 12,000 votes, ABC News reports.

Republican lawyers lost two cases in Michigan —similar to that in Georgia — when they were unable to provide evidence of voting or ballot irregularities, The Washington Post reported.

In the first case, a judge dismissed Republicans’ allegations that election workers had inappropriately cured a ballots in Detroit as “mere speculation,” and in the second case, a GOP election observer who alleged ballot mishandling was unable to provide any proof of wrongdoing, according to The Post.

Michigan was one of the states Biden flipped since the 2016 presidential election and surpassed President Trump there by nearly 150,000 votes, says ABC News.