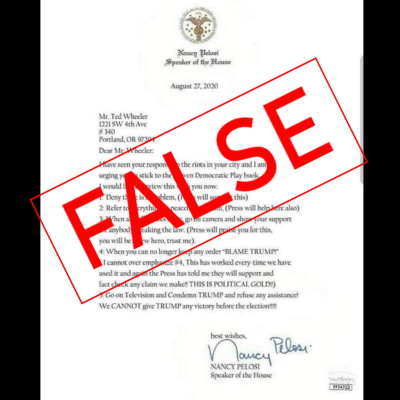 A digitally manipulated, phony letter referring to a “Democratic Play book” and attributed to House Speaker Nancy Pelosi has been circulating online, contributing to partisan rancor following the riot at the Capitol on Jan. 6.

A letter purported to be from House Speaker Nancy Pelosi and aimed at inflaming political division has been circulating on social media.

The letter is fake, Drew Hammill, Pelosi’s deputy chief of staff, told us in an email.

The image of the letter that has been shared online shows signs of digital manipulation, an expert explained, and an investigative reporter in Atlanta found the original letter that was used as a template. The original is for sale on eBay and shows very different text.

Regardless, the phony letter has stirred up partisan anger online in the days after a violent mob supportive of President Donald Trump stormed the Capitol as President-elect Joe Biden’s victory in the 2020 presidential election was being certified.

One Facebook post, for example, shared an image of the letter with this message: “Absolute Proof Of How Bad They Hate Our President. And How They are all liars!!” A screenshot shared on Reddit shows that the letter was also circulated on the right-wing social media platform Parler before it lost access to its servers.

A dubious website that was registered in October 2020 ran a story suggesting that the letter was taken from Pelosi’s laptop during the Capitol uprising.

The text in the bogus letter is dated Aug. 27, 2020, and is addressed to Ted Wheeler, mayor of Portland, Oregon. It advises Wheeler to “stick to the proven Democratic Play book [sic],” as his city was dealing with escalating violence between federal authorities and those protesting systemic racism.

Among the suggestions in the fake letter is this: “When you can no longer keep any order ‘BLAME TRUMP!’”

But that text was swapped in above Pelosi’s signature on a 2007 letter the speaker wrote to a supporter responding to a request for autographed photos. Brendan Keefe, an investigative reporter at an Atlanta-based news station, tracked down the original, which features the same identifying number on the bottom right corner and is for sale on eBay.

Hany Farid, a professor at the University of California, Berkeley, who specializes in digital forensics, analyzed the image circulating on social media and found a change in color that indicates the document was altered: 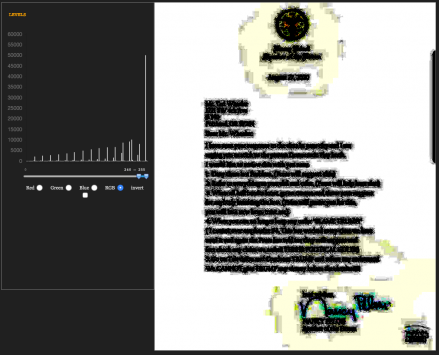 “You can see that the logo and signature have a different background than the rest of the image,” Farid wrote in an email to FactCheck.org, after adjusting the contrast to emphasize the brightest part of the image. “My guess is that these were lifted from a separate document with a slightly more yellow tint, and pasted into a new document.”

So, this fabricated letter is just another example of an attempt to spread divisive misinformation.

Keefe, Brendan (@BrendanKeefe). “Even after the disinformation has a body count, it continues. This is going around social as a letter removed from Speaker Pelosi’s desk. I found the original hand-signed letter on eBay. I also enhanced the image to show where it had been cut & pasted. These lies have cost lives.” Twitter. 10 Jan 2021.