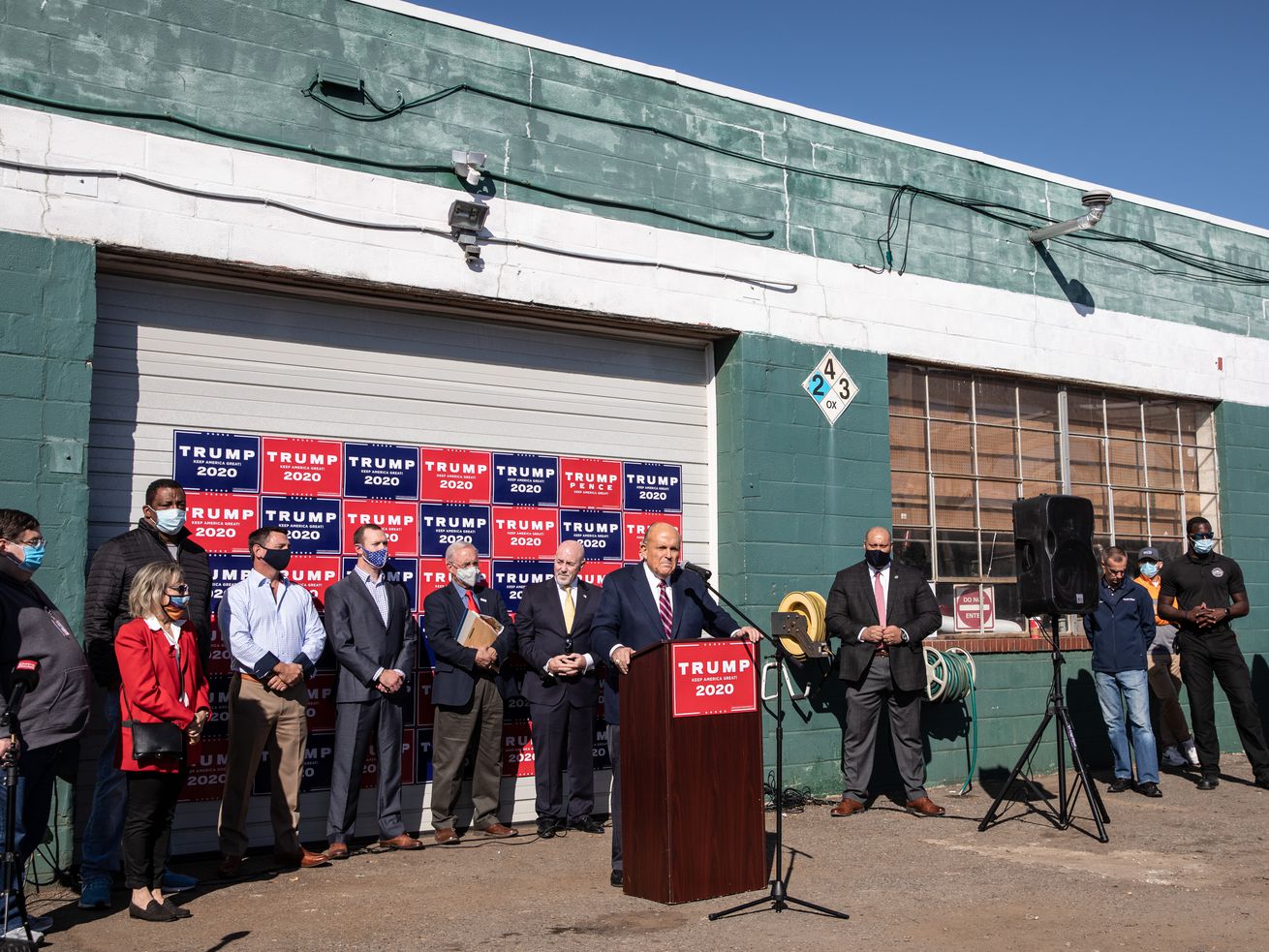 President Donald Trump’s legal team gathered Saturday morning in Philadelphia to hold a press conference at which they shared conspiracy theories about why Trump lost the 2020 election. The fact that the president’s lawyers are working to find ways to overturn the election results is notable, but perhaps even more so is where they chose to hold their conference: Four Seasons Total Landscaping.

The small business, which bills itself as a 27-year-old, woman-owned company that has grown to service major clients (including the city’s airport) appears to be an American success story. But the decision to hold the conference there, in front of a white garage door papered over with campaign signs, was incredibly odd. It felt awkward and small, the antithesis of a president and campaign that has long valued over-the-top visuals and maximum entertainment value.

The announcement of the event made it seem as though it would be a typical Trump team affair full of glitz: “Lawyers News Conference Four Seasons, Philadelphia. 11:00 a.m.,” Trump tweeted Saturday morning.

He later clarified, however, that it wouldn’t actually be held at the hotel chain but at the now-famous landscaping business, something the Four Seasons Hotel Philadelphia confirmed on Twitter:

The internet exploded with mockery and memes at the clarification, assuming there had been some bone-headed mix-up by the Trump campaign. The New York Times reported, however, that the mistake was “not in the booking, but in a garbled game of telephone.” The president was apparently told the conference would be at the business but misunderstood the name of the venue, thinking it would be held at the upscale hotel.

In many ways, this mix-up is indicative of the Trump presidency and the help he has received from his team of lawyers, led by former New York City Mayor Rudy Giuliani, who headed the conference.

Throughout his presidency, Trump has made grand proclamations of things to come — be it a state-spanning border wall paid for by other countries or a health care plan he’s insisted will protect preexisting conditions.

But when those things arrive — if they do — they’re far less impressive than promised. Only 15 miles of new border wall have been built, for instance, while the health care plan Trump repeatedly promised would be coming “within two weeks” never materialized.

Giuliani, too, has had this tendency; he spent months leading up to special counsel Robert Mueller’s report on potential collusion between Trump’s 2016 campaign and Russia touting an explosive counter-report that never arrived. His publicity-drawing quest to find dirt on President-elect Joe Biden turned up nothing, and his recent attempts to play up salacious material found on a laptop that he alleged once belonged to Biden’s son, Hunter Biden, have been confusing and strange — and have gone nowhere.

Instead of giving the administration positive accomplishments, these grand promises by Trump and his allies have underscored their ineptitude while distracting from important issues. That’s what happened Saturday: The bizarre venue choice overshadowed the point of the press conference, which was meant to spotlight Giuliani’s rehash of disproven conspiracy theories about massive voter fraud.

The lies the press conference was supposed to be about, briefly explained

The team had called the press conference to share baseless accusations of electoral malfeasance. Giuliani made several untrue statements about nonexistent voting irregularities in Pennsylvania, falsely complaining that poll watchers had not been allowed at counting locations in the state, a claim that has been negated by courts and publicly available video evidence.

These claims, while lies, echoed Trump’s rhetoric about the election. The president spent much of Saturday golfing and tweeting falsehoods about vote-counting problems; later he said he had no plans to concede.

Here’s the “all the networks” moment pic.twitter.com/j9UFzme4DE

It was a poignant moment of clarity and, it seemed, a symbolic repudiation of Giuliani’s wild and baseless conspiracy theories. He continued his remarks, though not many people were paying attention: There was a new president-elect, one who rejects the style promoted by the president and his lawyer.

The campaign, which has held a number of similar press conferences in Philadelphia attempting to cast doubt on the state’s vote count, has struggled to find appropriate venues for these events. Earlier in the week, Bondi and Lewandowski attempted to hold a press conference in the city following a court decision that allowed poll watchers to stand just 6 feet from workers counting ballots, rather than 20 feet. They tried to spin the ruling as a win; however, a DJ nearby blasted Beyoncé music and completely drowned out their remarks.

incredible job by the every vote counts protest across the road who pumped up Beyoncé’s Party so not one word could be heard of Pam Bondi’s speech pic.twitter.com/BwRQcweNPY

The space outside the Philadelphia Convention Center, where votes were being tabulated, was filled all week with Biden supporters chanting “count every vote.” It made for a difficult setting for the various Trump press conferences baselessly alleging voter fraud.

So a new, more remote location was looked for and apparently found at Four Seasons. “All great Americans in PA use Four Seasons Total Landscaping, Lewandowski tweeted later Saturday. “They love this country and are American Patriots. Thank you!!”

All great Americans in PA use Four Seasons Total Landscaping. They love this country and are American Patriots. Thank you!!

But even there, far from downtown, reality intruded and overshadowed the Trump team’s message. However, the venue choice appeared to benefit the company itself, which quickly went from an obscure landscaper to a place of national interest — and worked to capitalize on its newfound notoriety Sunday:

The Trump era may have roared in like a lion, but it’s quietly fading out

The whole debacle, from the downscale venue to the reporters packing up to the president’s attorney ranting with no connection to reality, provided a stark visual for the end of election week and a desperate end to America’s Trump era.

The president and the right-wing media apparatus in the US spent the last four years constructing an alternate reality wherein the most powerful man in the world and the lawmakers who surrounded him — who at one time had complete control over the government — were perpetual victims of conspiracies and vendettas.

They tangled the country up in these claims, leading to protracted battles over the Mueller report as well as the president’s impeachment. All of the claims seemed to suggest Trump was justified in his attempts to bend norms, break laws, and grab more power.

The president long indicated he would dispute a loss in a close election, but this one isn’t all that close. Liberals and progressives had feared Trump’s gambit might work, similar to how he escaped impeachment and wasn’t held to account for multiple abuses of power over the last four years. But ultimately, not even Trump can spin electoral math.

The idea that multiple states, some of which are controlled by Republicans, conspired to illegally rob Trump of an election win is ridiculous. And the Four Seasons press conference was a real emperor-has-no-clothes moment: A presidency that began with Trump’s descent into a golden lobby ended at a remote landscaping company, with the press packing up and leaving instead of staying and listening to nonsense.

View: 1 New Jersey Independent Venue Association (NJIVA) seeks to give live entertainment independent venues and promoters a stronger voice, as those venues continue to face the economic toll of…
View: 1 SOUTH BRUNSWICK – The number of positive cases of COVID-19 over the past week were once again very high, as the township, state and country continue to feel…
View: 1Bank Of America Expects 1.1BN People Will Be Vaccinated For COVID By Late 2020 If 2020 has been a year to remember, then it has also been a year…