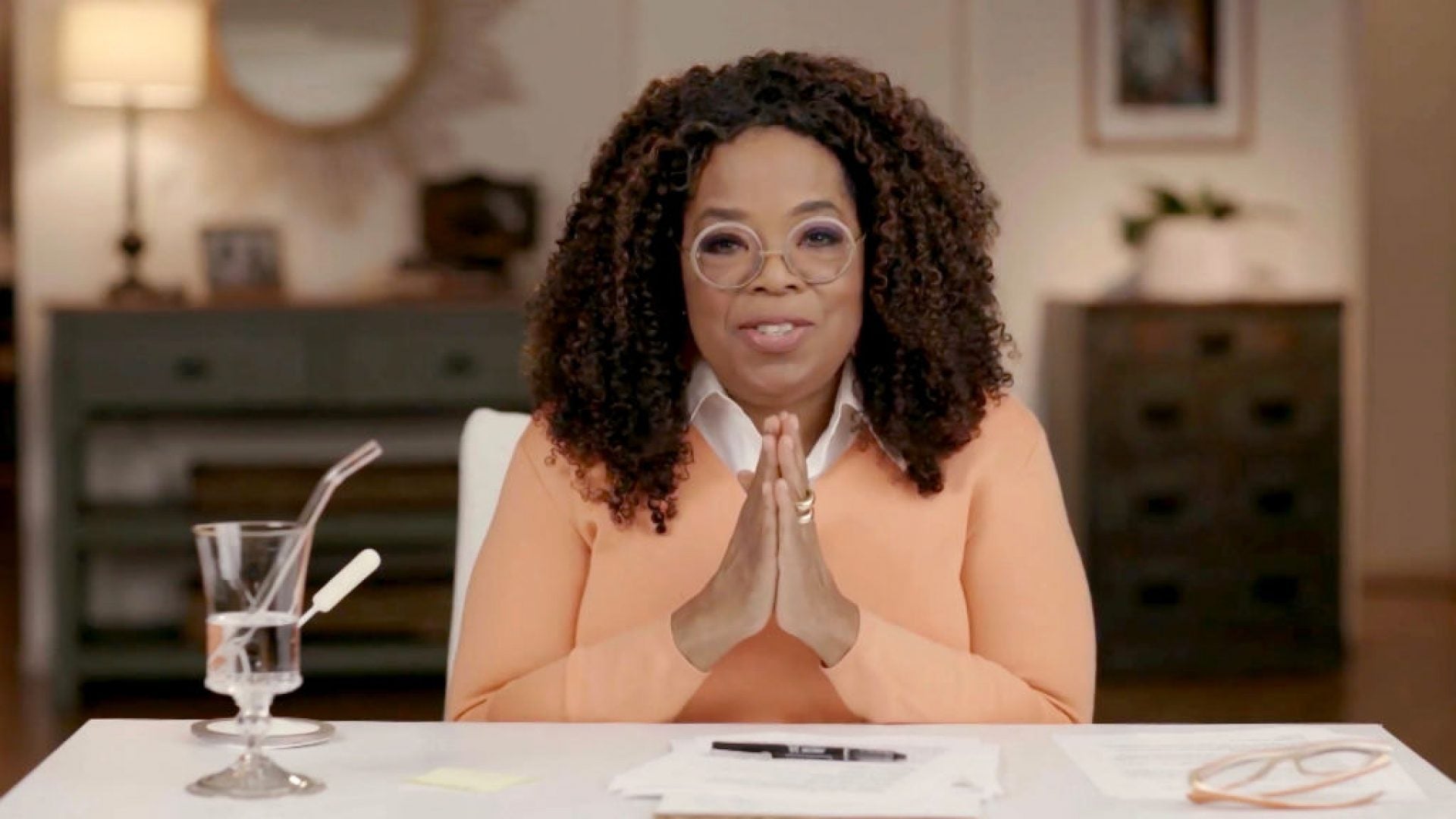 With a runoff election just weeks away that could tip the balance of the U.S. Senate, many people across the United States have Georgia on their minds. And Black women are pivotal in the race—from grassroots organizing to being members of a key voting bloc that helped lift Democrats to the White House in November.

The stakes are high: Democrats Rev. Raphael Warnock and Jon Ossoff are each locked in fierce Senatorial campaigns’ against Republican incumbents Kelly Loeffler and David Perdue, respectively. The January 5th runoff election could mean that Democrats potentially flip the Senate, or the GOP maintains majority control of the chamber. Under Georgia law, candidates must receive a majority of the vote to win an election. If no candidate breaks 50 percent, the top two vote-getters face off again in a runoff election to determine the winner.

“We were able to pull democracy back from the edge of the cliff,” said Oprah Winfrey, speaking during a virtual town hall in Georgia on December 4, part of her OWN network’s ongoing “OWN Your Vote” Initiative. The media mogul has stressed, “It is important that we own our votes and finish the job.”

There are 7.6 million registered voters in The Peach State, about 2.4 million of whom are Black, according to AP VoteCast data. Voter registration in Georgia ends on December 7 per state officials; early voting begins on December 14; the deadline to request an absentee ballot is December 31. According to The New Georgia Project, at least one million new Georgian voters have registered since 2018, and more than 800,000 have already requested an absentee ballot for January’s runoff.

“The upcoming special election in Georgia will have a huge impact on our nation,” Jotaka Eaddy, a national consultant and senior advisor to the OWN Your Vote Initiative, said. “This is a pivotal moment in American history in which voters in Georgia have another opportunity to demonstrate the power of their votes.” 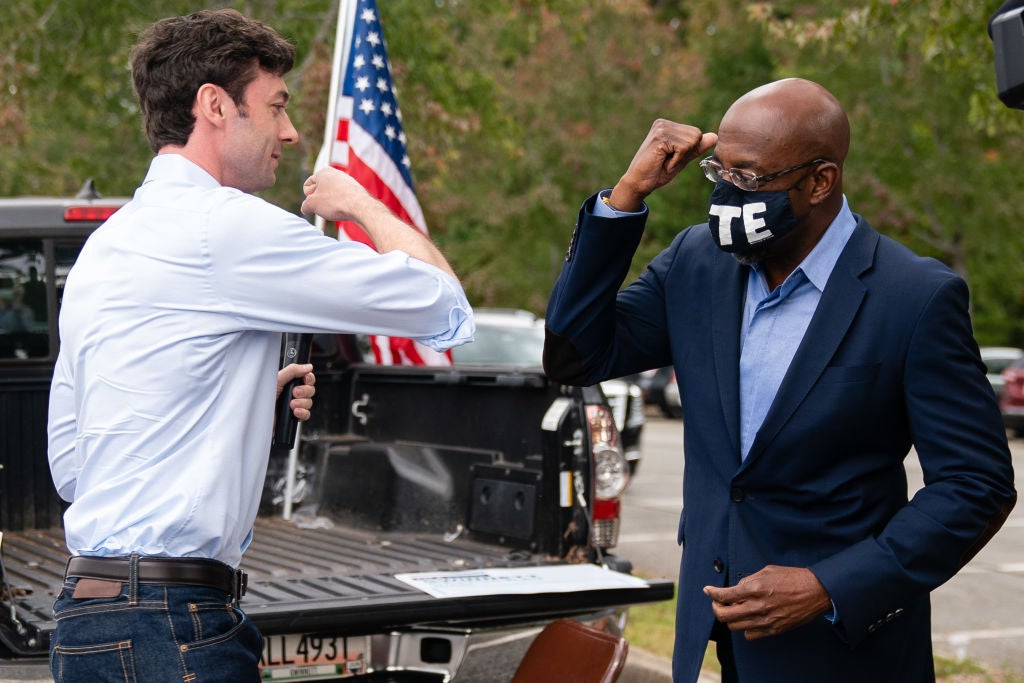 Launched in August, OWN  Your Vote is a bipartisan registration and get-out-the-vote  campaign. It partners with local and national grassroots and voting rights organizations to provide tools and resources that empower Black women to  vote. Its partners include dozens of organizations, among them, Woke Vote, Vote.org and Michelle Obama’s When We All Vote.

For the Georgia forum, in partnership with the Kapor Center, Winfrey was joined by actress/activist Kerry Washington to discuss the upcoming election and champion sistas involved on the front lines. While Black women appreciate “gratitude” for their votes, said Washington, they are ready “to step into” their power.

To wit, LaTosha Brown, co-founder of the Black Voters Matters Fund was applauded. So was Nsé Ufot, CEO of The New Georgia Project; in a full circle moment, the voter registration leader spoke of receiving a college scholarship years ago on The Oprah Winfrey Show. Stefanie Brown James, co-founder and executive director of The Collective Education Fund was spotlighted, along with Cheryl Lowery of The Joseph and Evelyn Lowery Institute, among others.

“The quality of our current and future lives will be greatly impacted by the outcome of the Georgia elections; the makeup of the U.S. Senate is that important,” Brown James told ESSENCE. The Collective, which builds Black political power, has done extensive voter registration, provided 12,000 Lyft rides to the polls and more. “From access to affordable healthcare to criminal justice reform to COVID-19 relief, the issues that matter to Georgians and all Americans is what’s at stake this election.”

Black women have long galvanized their networks and communities around voting. In Georgia, there are numerous Black women organizing on the ground. National legal organizations are active, too. Sherrilyn Ifill of the NAACP Legal Defense Fund and Kristen Clarke of the Lawyers’ Committee for Civil Rights Under Law—who’ve both taken part in the OWN town halls—have tackled voting rights, suppression and other election issues in the courts.

Black Voters Matter works in key states across the South. Traveling in a customized vehicle (dubbed “the Blackest bus in America”) they bolster voter registration and turnout; develop political infrastructure where little or none exists; and advocate for policies to expand voting rights and access. “The South is not ‘Red’ or ‘Blue.’ It’s people,” Brown said.

Stacey Abrams preaches the power of people, too. Abrams catapulted onto the national scene after running for governor of Georgia in 2018. The Spelman educated lawyer subsequently launched Fair Fight to advocate for fair elections. She has been widely credited for her role in shifting voting outcomes in Georgia this election cycle. Biden’s margin of victory over president Donald Trump—who hosted a rally this weekend in Georgia to support the GOP candidates—was about 13,000 votes.

Former President Barack Obama held a virtual rally on Friday with the Democratic candidates and allies. Meanwhile Warnock and Loeffler squared off in a televised debate on Saturday. Ossoff planned to debate his opponent, but Perdue was a no show.

Abrams’ welcomed entertainers to Fair Fight’s “Rock The Runoff” virtual concert on December 3, co-hosting with Kerry Washington, who was fresh from her duties at the earlier OWN event.

“Georgians have the opportunity to make history once again,” Abrams said in a statement. “We are committed to giving them the tools and resources they need to ensure they can make their voices heard at the ballot box.” 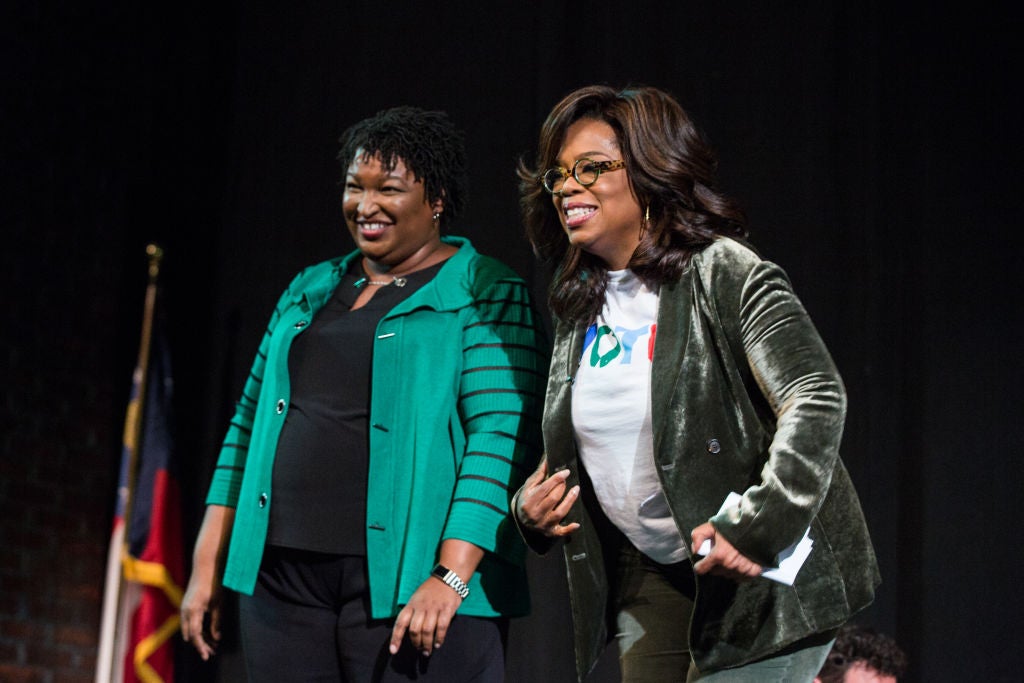 MARIETTA, GA – NOVEMBER 01: Oprah Winfrey and Georgia Democratic Gubernatorial candidate Stacey Abrams greet the audience during a town hall style event at the Cobb Civic Center on November 1, 2018 in Marietta, Georgia. Winfrey travelled to Georgia to campaign with Abrams ahead of the mid-term election.(Photo by Jessica McGowan/Getty Images)

Proceeds from the concert will go towards various mobilization efforts in the upcoming run-off election. For instance, Fair Fight is providing financial support to Georgia-focused grassroots organizations i.e. the local NAACP who are registering and mobilizing voters in the field, including COVID-safe door knocking.

The organization has also launched www.GAsenate.com with a video from Abrams, encouraging people to financially support their work, and the Warnock and Ossoff campaigns. The page raised $9.8 million in its first four days. Advocates told ESSENCE that money is crucial to winning a high-profile race such as the Senate runoff and urged folks to give if they can, even a dollar can help.

Many are praying about this election, too. Rev. Dr. Cynthia Hale of Ray of Hope Christian Church in Decatur, Georgia, offered prayer at the Own Your Vote town hall.

Melanie Campbell, convener of the Black Women’s Roundtable is hopeful about this election. 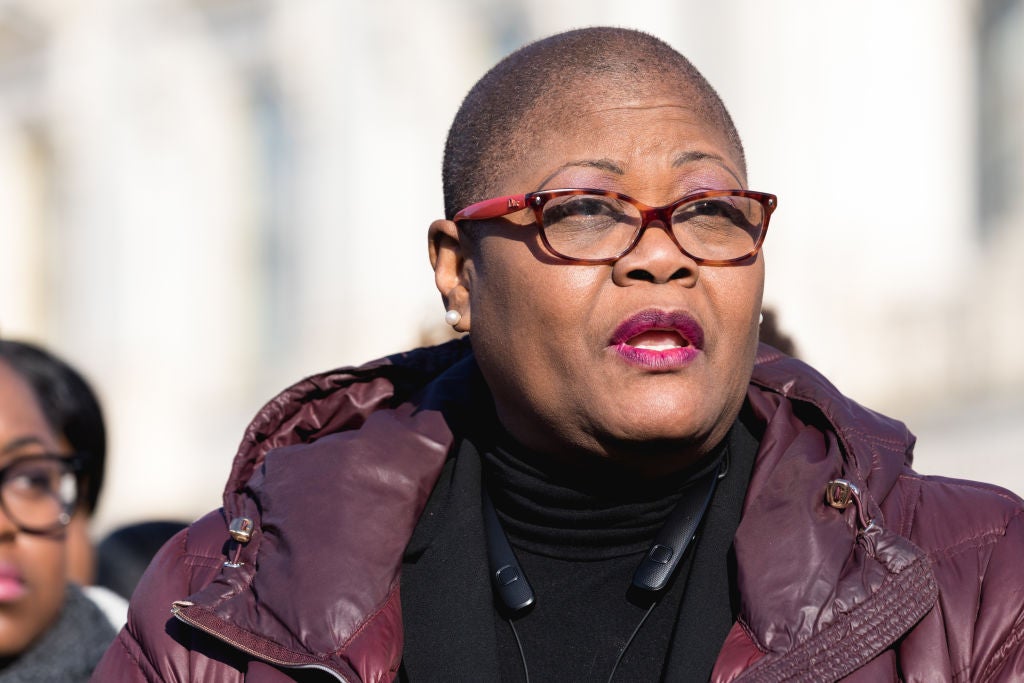 Her team’s Unity#LetsDoIt Again campaign already has Black women of all ages mobilizing voters across rural and urban Georgia. “Black women are the secret sauce that wins elections,” she told the town hall audience.

Community activist Shemeka Frazier Sorrells has witnessed the power of the vote. She is co-founder of ‘A Better Glynn, Inc.’ a social justice group in Georgia’s Glynn County. The area is where Ahmaud Arbery was gunned down by vigilante violence while jogging back in February; one or more of the men charged in his killing allegedly have white supremacist leanings. Sorrells’ registered voters who ultimately helped oust the former District Attorney who’d been criticized for her handling of the case.

As thousands of Black women at the virtual town hall listened, she uttered words that Winfrey felt compelled to repeat.

“The cavalry is not coming. We are the cavalry.”

View: 71While shoes are sometimes overlooked in fashion history, they are a staple in our wardrobe that metaphorically and literally carry us through life.  Step into FIT’s new exhibition, “Shoes:…
View: 2Glamour kicked off November with its annual Women of the Year awards, which recognize and celebrates the industry’s biggest trailblazers of the moment. The legacy magazine held the most recent…
View: 0With the exponential rise of interest in Formula 1 and the popularity of Netflix’s hit docu-series “Drive to Survive,” we’re only going to see auto racing become even more prominent…