If anyone’s slightly surprised to spot Goo Goo Dolls frontman John Rzeznik chasing his 3-year-old daughter Lili down the street in a pink jeep while the band’s Christmas music rings out in the distance over the holidays, they’re not alone. If someone had told the 54-year-old musician that he would one day be a sober, doting girl dad preparing to drop the group’s jazzy first holiday album, It’s Christmas All Over, he would have scoffed.

“My daughter wants a pink jeep for Christmas because her friend has one – those little cars kids drive down the sidewalk. I’m like, ‘That’s so obnoxious,’” Rzeznik laughs. “Then I’m like, ‘Okay. What the hell.’ If someone had told me [25 years ago] that this is how my life would turn out, I would’ve said, ‘You’re crazy.’ I never thought I’d marry again or have kids, but I got clean six years ago and it was like a metamorphosis.

That metamorphosis entails enjoying family time with his wife, Melina, and Lili, staying connected with fans amid the pandemic via virtual performances, hosting his “Chorus & Verse” podcast and now – after 35 years in the band alongside Robby Takac – entering festive new realms with the first Goo Goo Dolls Christmas album. 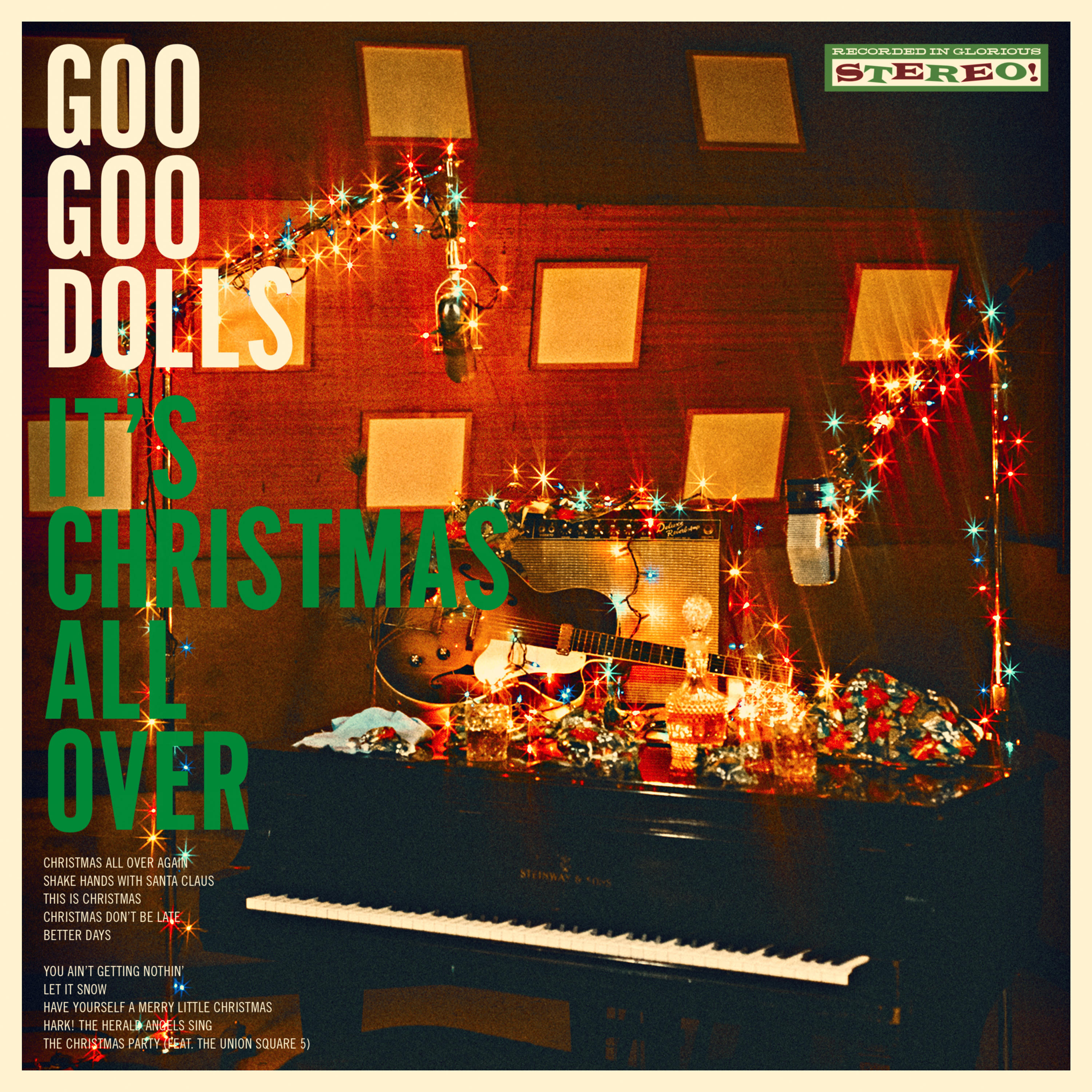 Rzeznik, Takac and band members Jim McGorman and Brad Fernquist started recording a Christmas single earlier this year, but Rzeznik had so much fun he wanted to produce an entire record.

Dropping on Oct. 30 on Warner Records, It’s Christmas All Over features two originals songs, including the first single, “This Is Christmas”, alongside the band’s spin on both “obscure” and classic holiday tracks. Christmas isn’t the only uncharted musical territory Rzeznik and Takac explore – jazz seeps through songs like tongue-in-cheek original track, “You Ain’t Getting Nothin”, before culminating in merrymaking instrumental medley, “The Christmas Party”, featuring The Union Square 5.

“I thought it’d be cool to do a medley of Christmas songs,” Rzeznik says. “We were going to end with ‘Hark! The Herald Angels Sing,’ but it sounds depressing, so instead we have that reflective moment, then segue into the joyous, fun part of Christmas – having a big Christmas party.”

For Rzeznik, it’s a holiday which reminds him of some of the happiest moments of his at-times tumultuous upbringing, during which both his parents died when he was a teenager. Christmas gifted him his fondest family memories. “Christmas was always a good time,” he reflects. “We basically called a ceasefire and everybody had a good time! There were lots of relatives, toys, ripping open gifts. My parents were great about Christmas.”

“And, I love Christmas now,” Rzeznik continues. “We decorate trees, have everybody over and cook a bunch of food. It’s the happiest time of year. I love having a 3-year-old girl who loves Christmas too. She understands Santa and the elves and is very into it. Hopefully, she doesn’t figure it out too soon because I’d love to enjoy it for a few more years.”

The cutie will celebrate her fourth birthday three days before Christmas and Rzeznik says she’s already blossoming into a fiercely independent young girl. “She’s at that age where she’s desperately trying to be independent. Everything is, ‘I don’t want to!’ or ‘I know!’ or ‘I don’t need help!’”

As part of a band of girl dads (Takac has an 8-year-old daughter, Hana, while McGorman’s 7-year-old Sydney performs a raw and powerful version of the group’s “Better Days” on It’s Christmas All Over) Rzeznik’s proud to be raising a strong-minded daughter. And, she doesn’t need to look far for female role models.

“My life’s come full circle because I grew up in a house full of women and now I’m living with my wife, her nieces, her mother and Lili,” he says. “It’s fun. Sometimes I don’t quite understand certain things! But it’s all good.”

Lili gave me a manicure. I hope this is over soon. #quarantinelife

While it’s not a life he necessarily envisioned while climbing the charts with “Name” and “Iris” more than two decades ago, his family are no doubt added motivation to maintain his sobriety. Rzeznik started drinking during his teens and entered rehab in 2014.

“My perspective on the world, myself and people around me changed,” he reflects about sobriety. “[Being] responsible and living up to my promises has been so good. There’s a certain amount of selfishness that goes with addiction and when you lose that selfishness, life opens up and becomes amazing. It doesn’t get easier, but it gets better.”

“But I keep my last drink and last drugs experience very close to me,” he adds. “It’s not like I dropped my problems with substances and I’m walking away while they’re fading into the horizon. They’re walking right next to me, so I’ve got to stay on guard.”

In moments of temptation today, Rzeznik calls Melina or his manager and asks them to remind him of a time he was “blacked out or out-of-my-mind.” Naturally, some moments are more challenging than others. However, it’s not raging, boozy nights he craves, rather the ability to savour a nice glass of wine.

“It’s hard to eat Italian food without wine,” he says. “That’s one [situation] where I sometimes think, ‘Maybe you can have one drink.’ Then I’m like, ‘Nah, man. You lost that privilege. It’ll destroy your life.’ So, then I drink club soda, eat my pasta and shut up.”

Having saved his health and built a beautiful family life, Rzeznik’s coping with the unwanted strangeness of being unable to tour for the first time in decades by doing what he does best – working on a new album, with hopes to have it ready for the band’s rescheduled Miracle Pill Tour in 2021.

It’s a year he hopes will bring change and some sense of normalcy following the pandemic and a presidential term during which, like many, he has become increasingly uneased.

“I’m no longer an overt political activist because as I’ve grown older, I’m more cynical,” admits Rzeznik, who has acknowledged political divide and social unrest in songs like 2017’s “Tattered Edge/You Should Be Happy”.

“That song’s about this chronic, low-grade anxiety that everybody’s been feeling since 9/11. People have been traumatized by 9/11, two wars, a financial collapse and then there’s the last four years with Trump, which have been really difficult.”

“My wife’s family are immigrants from Argentina, so that’s a big sticking point for me, as is separating kids from their families,” he adds. “It’s been four years of, ‘Oh my God. What’s happening next?’ And, now with this pandemic it’s like, ‘Can we just have four normal years, please?’ I’m looking forward to a nice, boring, normal summer!”

Until then, fans can catch Rzeznik on It’s Christmas All Over, during a virtual performance in December – or come Christmas, perhaps escorting young Lili down the street in her new pink Jeep.

Get It’s Christmas All Over here.