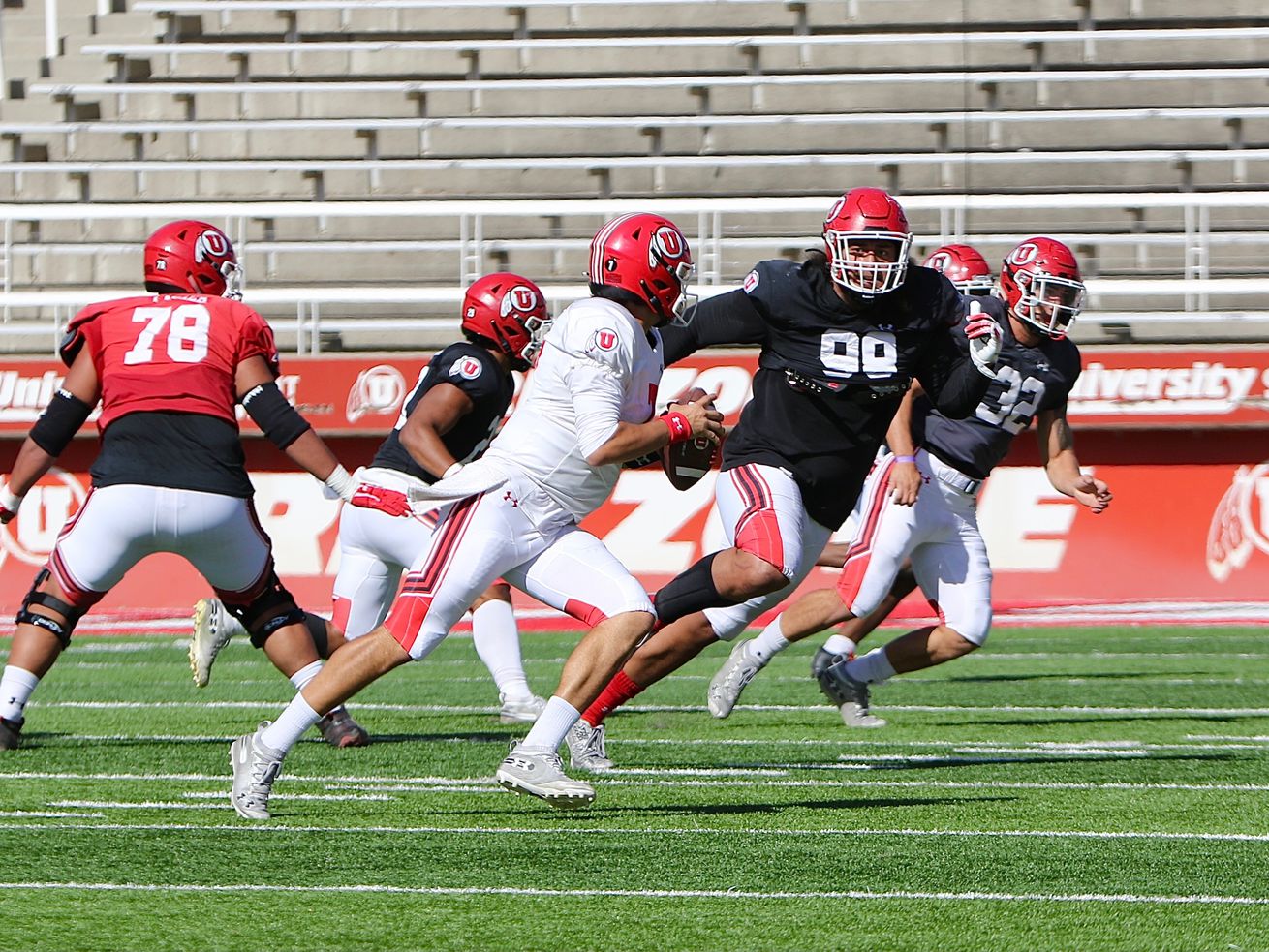 “Next man up” mentality has keep things rolling under Whittingham.

Utah’s defensive line has garnered the reputation of reloading and not rebuilding over the years.

The numbers back it up. The Utes have had 18 defensive ends and/or tackles drafted by the NFL since 1994, the year head coach Kyle Whittingham began his lengthy tenure with the program. He oversaw the defensive line that season and became defensive coordinator the following year.

Whittingham held that title until being elevated to the top spot as co-coach with the departing Urban Meter in the 2005 Fiesta Bowl win over Pittsburgh.

Throughout that time, Utah’s defensive line has forged a proud tradition. It began with a bang. In Whittingham’s first season, he coached future NFL draft picks Luther Elliss and Bronzell Miller. Standouts Henry and Jeff Kaufusi were also on that line.

“I can’t remember. I’m sure there was a year or two we weren’t as formidable,” Whittingham said. “But most years we were pretty darn good up front. Last year was certainly no exception and this year we’ve got some new faces in there, but we expect a lot of production.”

Tafua is back and headlines the latest reloaded line. Senior Maxs Tupai will man the other side with freshmen Van Fillinger and Xavier Carlton making cases for playing time. Sophomore Blake Kuithe is another player to watch. Whittingham also noted that BYU transfer Devin Kaufusi has been a great addition.

“We feel like we’ve got a lot of depth there. Really, there’s not a lot of separation between a lot of the guys,” Whittingham said. “But that should play itself out throughout the course of the season in determining who is going to get a majority of the reps.”

Utah is also well stocked on the interior. Seniors Viane Moala, a transfer from Hawaii, and Hauati Pututau entered camp on top of the depth chart. Whittingham noted that freshmen Tennessee Pututau and Tanoa Togiai are making waves. Senior Pita Tonga is also on the two-deep chart.

The continued tradition on the defensive line is under the stewardship of assistant coaches Lewis Powell and Sione Po’uha. They both had stellar careers with the Utes and are quite invested in the process. Whittingham considers it a big positive to have both guys working in the program.

“They know the expectations and the tradition here at defensive line — and have done a really nice job to continue that,” he noted. “Last year’s defensive front, like I’ve said, was extremely productive.”

Keeping things going is just part of the deal. Po’uha, who was a captain on Utah’s Fiesta Bowl championship team before a lengthy career in the NFL with the New York Jets, said there’s a “next man up” approach.

“There have been tons of great players that have come through here,” he said, reeling off names like Star and Lowell Lotulelei, Filipo Mokofisi, Fotu and Penisini. “When those guys leave it’s really the next man up, and that’s always been the mentality here and our guys have been used to it.”

“The culture here is one of the best in the nation,” said Hauati Pututau. “So I just wanted to be a part of something special.”

The former Cottonwood High School standout likes the location, too. Playing close to home is something he appreciates. Much of Utah’s success up front has featured hometown talent. Both Fotu and Penisini — the guys Hauati Pututau and Moala are projected to replace as starters — also played their high school ball in the state.

Pututau said it was a honor playing with them the past couple of years.

“I learned a lot from them on and off the field,” he said.

Although Pututau acknowledged there are some big shoes to fill, the defensive line has worked hard on aspects of the game — pass rushing and run blocking.

“I feel like we’re physically there,” Pututau said. “Just come on Nov. 7 we’ll show the nation that there wasn’t a drop off.”

Expectations are especially high for Moala. He’s drawn a lot of praise in camp and scouts have told the coaches that the 6-foot-6, 323-pound player from American Samoa may be one of the best defensive linemen in the Pac-12.

A couple of variables factored into his decision to transfer from Hawaii to Utah, where he spent his junior year as a reserve behind Fotu and Penisini.

“I just knew they have like a great defensive lineman program over here. They’re known for their D-line,” Moala said. “So it’s going to be a perfect match for me.”