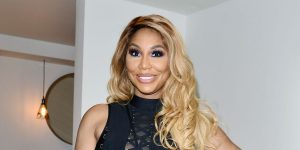 Tamar Braxton appeared on Taraji P. Henson’s Peace of Mind With Taraji series and opened up about the reason why she attempted to take her own life.

“I didn’t want him to be embarrassed in front of his friends,” said Braxton to Henson. “Here is this loudmouth ghetto mama.”

The actress asked Braxton, “You thought he would be better without you?” Braxton replied, “I thought in that moment.”

Tamar Braxton was hospitalized following a suicide attempt and said living her life in the public eye pushed her to the edge.

Braxton’s then-boyfriend, David Adefeso, called for medical attention after she was found unresponsive in their Los Angeles Ritz-Carlton hotel room.

But she’s seemingly recovering and spoke about her mental health issues with a picture of her embracing her son, Logan. “Thank you to each and every individual who has prayed for me, thought of me, sent me their love and has showered me with their support. In this present moment, it is my only responsibility to be real with myself and to be real with the ones who truly love me and care for my healing,” the post began.

Peace of Mind With Taraji appears on Facebook Watch every Monday and Wednesday. The episode with Braxton is titled, “Surviving Mental Breakdown With Tamar Braxton.”

The post Tamar Braxton Says She Attempted Suicide Because She Felt Her Son ‘Deserved Better’ appeared first on The Source.

View: 1 Led by a ruthless commander, the rotten clan of hyenas seizes power from the lions. An exiled warrior queen is hell-bent on winning back the throne for the…
View: 1 Shereyah Barbera, left, Annice Sterling and Magdalena Litwinczuk, registered nurses from New York’s Northwell Health, link arms as they listen to a co-worker speak during a press conference…
View: 1 A disposable face mask lies on leaves on Westminster Bridge, in London, Tuesday, Dec. 15, 2020. London and its surrounding areas will be placed under Britain’s highest level…