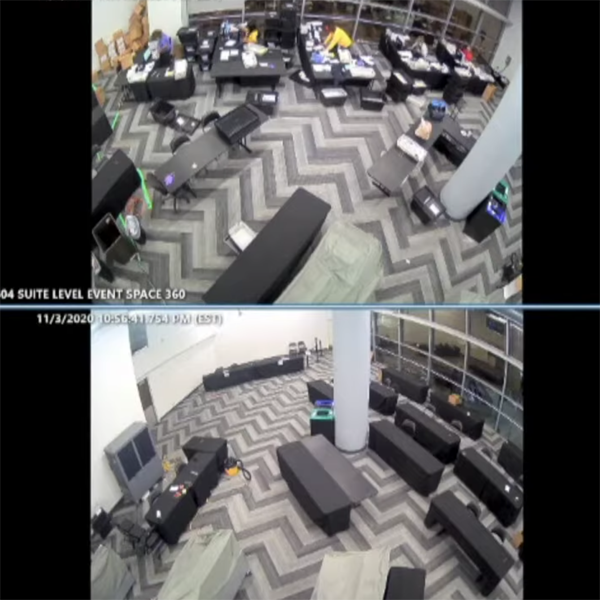 The Trump campaign is falsely claiming that surveillance camera footage captured election workers in Georgia adding thousands of illegal ballots that were brought into an Atlanta facility in suspicious “suitcases” on election night.

But state officials told us that the full video shows the supposed “suitcases” were actually standard containers used to secure ballots, and that the ballots in question were opened and prepared for counting earlier in the night in full view of observers. They said the campaign presented limited, selective parts of the footage.

That’s based on their review of the day’s video footage in full. Also, even though observers from the parties and press left the room before vote counting resumed, officials said, a state election board monitor and investigator from the Secretary of State’s office both returned to watch the counting until its completion.

Left unclear, though, is whether the observers and news media who were in the room were ever told by any election worker, explicitly or implicitly, to leave because the vote counting had ceased, as we’ll explain. Republicans allege that happened. Fulton County’s election director has disputed that claim.

No ‘Suitcases’ in Video

The video in question — which has been widely shared across social media — was presented to Georgia state legislators during the Dec. 3 hearing by a lawyer named Jacki Pick, who said she was volunteering for Trump’s legal team. Pick said the team had received the footage the night before.

Pick said the video shows observers and the press leaving a room at Atlanta’s State Farm Arena, which was used to count absentee and military ballots, shortly before 11 p.m. She claimed that, according to witnesses, a woman had told the observers and press that “we’re going to stop counting, everyone go home.”

She pointed out that many of the elections workers had left for the night in the video, but four workers are seen in the video staying behind to continue counting.

“Once everyone is gone, coast is clear, they are going to pull ballots out from underneath a table – watch this table,” she said at the hearing. “I saw four suitcases come out from underneath the table.” The video shows the counting continued until nearly 1 a.m., she said.

But the supposed “suitcases” were typical ballot containers used to secure ballots, Georgia’s Deputy Secretary of State Jordan Fuchs told us in a phone interview. Likewise, Matthew Mashburn, the state Senate’s appointee to the state election board, told us the video showed “standard secure containers that are ubiquitous in tabulation in Georgia.”

“They were put in there about an hour earlier,” Sterling, a Republican, said by phone. He said of the Trump campaign: “They watched the same video tape.”

Sterling also said he saw no anomalies in the vote data that suggested any kind of mass voter fraud, as has been alleged. “These are just regular elections workers” doing their job, he said.

While state law allows for observers to watch the vote counting, Sterling said, it was not illegal for the vote counting to resume when the observers left. He said his office was working on making the video footage from the arena public so that voters could see the footage with more context.

What is clear from our interviews with state officials is that, at some point, the elections workers did evidently plan to stop counting votes.

While Pick claimed that witnesses said they were told to leave, Barron said that “no announcement was ever made to leave, for anyone to leave.”

State officials, however, said they couldn’t definitely say whether that occurred.

“We have launched an investigation into why the monitors from the political parties left before scanning ended,” the Secretary of State’s office said in a statement. “While it was their right to leave early, we want to make certain they were not misled into thinking scanning had stopped for the night when it had not. Nothing we have learned from the independent monitor or our investigation have suggested any improper ballots were scanned.”

Sterling said it did not appear there was any official announcement made to the observers or press, but there’s no audio to prove that one way or another.

Pick didn’t respond to our request to see the affidavits she said supported her claim. While Pick is listed as a lawyer by the State Bar of Texas, she appears to work primarily as a conservative podcast host. She and her husband, Doug Deason, are major Republican donors.

Also, there’s no evidence that a “water main break” inside the arena earlier that day had anything to do with the observers and press leaving, as some have claimed.

One of Trump’s sons, Eric Trump, wrote on Facebook that “Republican observers were cleared out of State Farm Arena due to a ‘water main break’, but 4 people stayed behind, rolled out suitcases of ballots, & continue to count ballots in private from around 1030PM until 1AM.”

But the water leak occurred at 6:07 a.m. on Election Day, according to the arena, and it was fixed within two hours — meaning it occurred long before the episode in question.

During the legislative hearing, Pick maintained that the votes counted in the room after observers left could have been enough to change the presidential election results in Georgia.

Pick theorized that the machines in the room could have totaled “18,000 ballots.” (Biden won the state by less than 12,000 votes.)

But that’s wrong, according to the state election board monitor who was in the room as they counted.

The monitor — who agreed to be interviewed on the condition of not being named due to death threats faced by election workers — told us he was in the room until about 8:15 p.m., when he left, and returned at 11:52 p.m.

Fuchs, the deputy secretary of state, told us the monitor was not required to be there at all times, but she instructed him to return after hearing from news outlets that the county was going to cease counting for the night.

The footage is not the first to spark claims of fraud in Georgia. We also wrote about a video showing an election worker conducting an ordinary part of the recount process in Gwinnett County that prompted false claims. The videos have been part of a surge of falsehoods aimed at undermining the results of the 2020 election, as we’ve reported.

Editor’s note: FactCheck.org does not accept advertising. We rely on grants and individual donations from people like you. Please consider a donation. Credit card donations may be made through our “Donate” page. If you prefer to give by check, send to: FactCheck.org, Annenberg Public Policy Center, 202 S. 36th St., Philadelphia, PA 19104.

View: 100Police say the shooting took place outside Woburn Collegiate Institute around 3:20 p.m. on Monday, and left 18-year-old Jefferson Peter Shardeley Guerrier dead. See source
View: 1A ticket sold in Ontario has won the Lotto Max jackpot for Tuesday’s draw and there were also other big-winners sold in the province.  See source
View: 0More than 96 per cent of voting members of Halifax Regional Police said they did not have confidence in police chief Dan Kinsella as a leader, according to an…