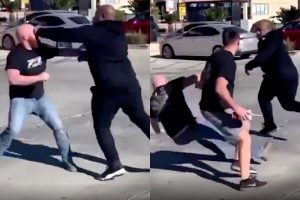 Wack 100 usually makes headlines for making bizarre remarks, but this time we’re actually rooting for him.

Wack was grabbing a bite to eat at Primo Burgers when two white men were reportedly burning rubber behind him. He says he asked them to stop and one of the men yelled out as they exited out of their car, “Mind your f—–g business n-word!”

The suspected white supremacists then rushed Wack and one of them swung but that was a sad mistake. The manager hit the man in the face and he started bleeding.

The other man wanted smoke and asked the person recording to get Wack 100’s license plate.

Unsurprisingly, the men called the police claiming to be the victims in the situation. “I was the victim. It was 2 on me and 2 approaching skinheads — I’m just not going for it. Been doing this way too long,” Wack 100 wrote.

He continued to advise Black people to protect themselves from “they.” “To all Black people, be careful. They are plotting and will try to attack you when they think you’re vulnerable. As a Black man, I was in fear of my life so I defended myself. Now, they have called the police playing victim.”

The post Wack 100 Squares Up With Two Suspected White Supremacists appeared first on The Source.