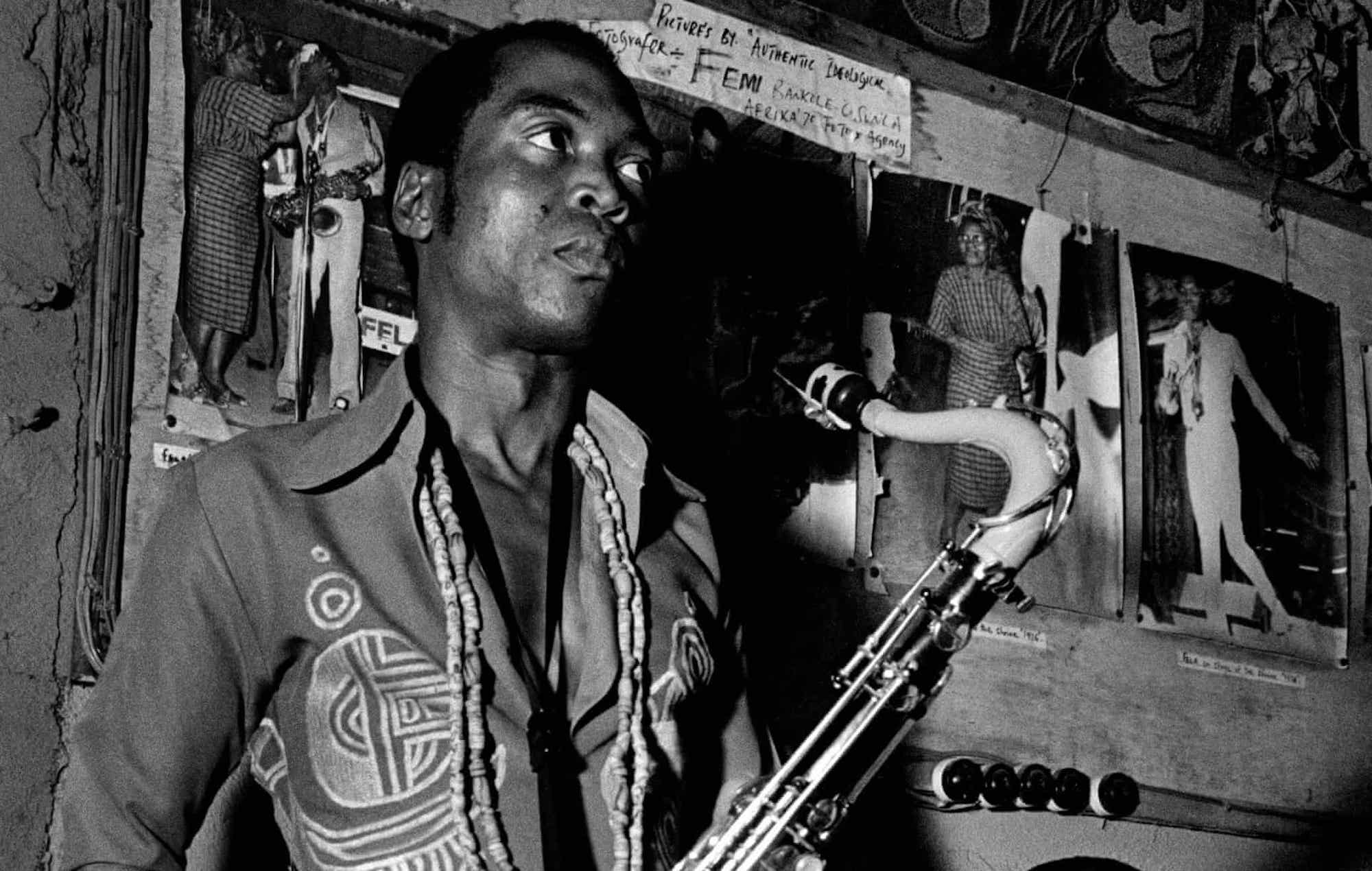 On 18 February 1977 a thousand soldiers from the Nigerian army stormed a communal compound in Lagos that outlaw bandleader Fela Kuti had declared his own independent state: the Kalakuta Republic. They brutally beat Kuti, burned his home and studio to the ground and threw his mother Funmilayo from a second floor window, injuring her so severely that she died within weeks. What sparked all this carnage? A song called ‘Zombie’.

Released earlier that year, the track clearly touched a nerve with Nigeria’s ruling military junta. Over 12 minutes and 26 seconds of relentless polyrhythmic groove, Kuti took aim at the mindless obedience of his country’s military. This combination of irresistible music and insurrectionary politics would define Afrobeat, the genre Kuti created and made his own.

“Afrobeat is like taking a bitter pill with a sweet drink,” explains Kuti’s eldest son, Femi, speaking over Zoom from his home in Lagos. “The music and the rhythm is nice, but the message is hard. For you to be able to digest this very serious message, you need something sweet.”

The birth of Afrobeat and the life of Kuti – who died from an Aids-related illness in 1997 – are the subject of Fela Kuti: Father of Afrobeat, a new feature-length BBC documentary by the writer and filmmaker Biyi Bandele. It’s a remarkable film that traces Kuti’s journey from his earliest years growing up in Abeokuta, in southwest Nigeria, under the watchful eye of his mother, the country’s first feminist activist.

As a young man Kuti studied in London, becoming part of Soho’s jazz scene and forming his first band Koola Lobitos. When they toured America in 1969, Kuti met and began a relationship with Sandra Izsadore, a Los Angeles-based member of the Black Panthers who would influence his political radicalisation by encouraging him to read books like The Autobiography of Malcolm X.

While Femi acknowledges that his father was inspired by his experiences in Britain and America, he argues that musically Afrobeat can be traced directly back to Kuti’s childhood. “What we have to understand about Fela’s creation was that he grew up in Abeokuta, which was like a village,” he says.

“He grew up with African rhythms and folk songs. When he went to England he fell in love with Miles Davis’ jazz, but then he came back to Nigeria and started to play highlife. His mother told him to look for his own style of music. She was very political, but he seemed not to pay attention. It was easy for him when he met Sandra in Los Angeles, maybe out of love or whatever, to sit down and compose this unique style of music because he had all these rhythms from Africa.”

“On songs like ‘Alu Jon Jonki Jon’ he would play phrases that were references to traditional African folk songs. He had the knowledge, experience and understanding to transform all this information he had musically, to play something that was basically himself.”

In 1970, realising he had found his unique sound, Kuti renamed his band Africa ‘70 and they put out their debut album Fela Fela Fela. He had his first hit the following year with ‘Jeun Ko Ku’ (‘Chop and Quench’), a song about a glutton who eats himself to death intended as a pointed satire of Nigeria’s upper classes. From then on his music would always deliver a message, and would always be his own singular vision.

“Fela created every single part of his compositions,” says Femi. “ You would never say: ‘Oh Fela, I have an idea!’ You couldn’t! When I joined the band, even as his son, I couldn’t say: ‘Excuse me, daddy!’ I was a teenager when Tony Allen was part of the band, and Fela would give him the beat. No doubt Tony Allen was a great drummer, but nobody composed for Fela. You couldn’t give Fela advice musically, politically or socially. They tried to tell him not to have women. They told him to wear a condom because of Aids. Fela said: ‘Look, if I’m going to die, I’m going to die.’ This was Fela.”

Kuti’s funeral in Lagos was attended by over a million people. In the years since, Afrobeat has been kept alive both by Femi and his younger brother Seun. While Kuti’s sound has clearly influenced generations of younger musicians, particularly in Nigeria, Femi is quick to point out that there’s a stark difference between the music his father played and the contemporary genre known as Afrobeats.

“Afrobeats is really like hip-hop or pop,” he argues. “The young generation were looking for a name so it wouldn’t sound like American hip-hop. When you listen to my father you’ll see they’re very far from my father’s style of composition, which have horns, melodies, harmonies and rhythms. They just take a little bit of his rhythm and they put it in all the Afrobeats songs, basically! Afrobeat is more hardcore. It might sound like party music, but the message is serious.”

Femi practices what he preaches. In February he’ll put out his latest politically-charged album Stop The Hate at the same time his own 25 year-old son Made Kuti releases his debut record For(e)word. Together they’ll be released as a joint double album known as Legacy+.

“The ‘+’ was my dad’s idea,” says Made, who’s on the same Zoom call with his dad. “The ‘+’ symbolises that it’s forever. We did a bit of research and found out that it’s been seven generations of musicians. There was a hunter/musician, and after him another musician. Then there was JJ Ransome-Kuti, who wrote a lot of hymns and was the first person to do a proper record in Nigeria. Then Israel Oludotun Ransome-Kuti, Fela’s father, also wrote hymns. Then there’s Fela, my dad and me. That’s a long line of musicianship.”

Made Kuti plays every instrument on For(e)word, so he’s clearly inherited his family’s musical virtuosity. He’s also keeping alive the Kuti tradition of political outspokeness. On outstanding central track ‘Different Streets’, Made delivers a monologue about Lagos that questions the popular idea that his grandfather was a prophet.

“Grandpa was not predicting the future with his songs,” he points out softly. “He was speaking about everything he saw, everything that was wrong… We must now understand just how scary it is that we are facing the same problems from the ‘70s. Think for ourselves how hard we must work collectively to be free.”

Tragically it isn’t hard to draw a line from the ransacking of Kalakuta and the police’s killing of his great-grandmother in 1977 to the unchecked police violence and corruption that sparked Nigeria’s ongoing #ENDSARS protests.

“All the challenges we face today are the challenges we faced decades ago,” says Made. “If anything they’re worse now, but Fela went to prison and was beaten for saying openly that these problems exist. We can’t appreciate what we’re facing now if we don’t understand that we’ve been facing it for many, many years.”

Fela Kuti: Father of Afrobeat is available on BBC iPlayer until December 20. Femi Kuti and Made Kuti will release ‘Legacy+’ on February 5 2021.